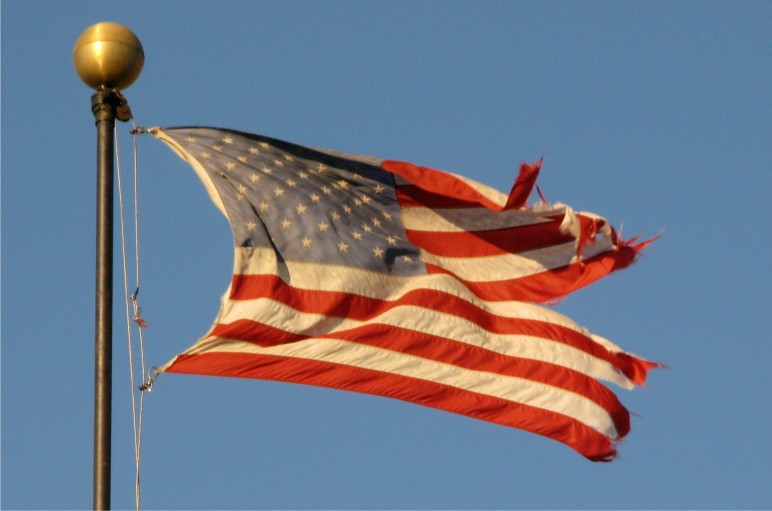 I’d experienced passive antisemitism before, but this was different.  Suddenly, it wasn’t so passive.  It sliced across a social media feed, cleaning cutting through friendships.  People I had thought were “good people” suddenly so filled with anger, with hate.  When I dared to speak my feelings, I was told that I was overreacting, that I’d be ok because I was one of the “real Americans.”  The idea that there were suddenly different classifications of Americans…rattled me to my core.

Because I knew, deep down inside, in the same place I know most truths, that when it came down to it, when my countrymen started deciding who was and wasn’t a “real” American, I was going to fall on the bad side of a dividing line.

I looked at my husband, nervously, but he was calmer about it all than I was.  He’s lived his life as the “other.”  He’s been asked to show people his horns.  He’s been let go from jobs for “not fitting the corporate culture.”  He’s been separated and categorized since childhood and it’s nothing new to him.  I’m less familiar, less than a decade into this, so it’s much more pressing to me, pressure on my chest as I struggle to breathe normally.

And, several months later now, it is.  I find a new peace after the initial upheaval of friendships.  I find a even stronger attachment to Judaism, each mitzvah connecting me where the rest of the world seeks to divide and separate.  I feel warmth and comfort in traditions of an adopted people where the people of my birth have become somewhat unpredictable, even frightening.  I close my blue eyes as I light Shabbat candles and pray in Hebrew and feel whole again.

The past year was a lesson in the unpredictability of life for me.  You can never know what the next year will bring and you can little control what is headed your way.  It was a lesson in trust, hope, and letting go of needing everything to always make sense, but instead believing that everything is for the good even where it’s hard to see.  It’s a lesson that the nation that I was born in and raised me may not always be my homeland and that my choice to cleave to the Jewish people does separate me just as much as they find themselves often separated.

I may not always be able to be a “real” American…or much else…and also be a Jew.

I made my choice years ago.  My family disowned me for a time because of it.  Still, only when I felt the tolerance of my nation for those who are different seismically shift beneath me did I fully and deeply understand all the possible consequences for that choice.  I found myself taking solace and comfort in Judaism rather than running from it or trying to hide it.  Up to that point, my Judaism had been still soft-set, I think.  It was there, but it was still fragile, moldable.  It was this year and seeing swastikas that hardened it and caused it to grow deeper roots.  It was no longer so passive a choice because the pressure against it demanded a response.

Some people reacted to all this by becoming more hardened in their political opinions, to either extreme.  I’ve never felt myself very political and I still do not.  For me, it was my faith I ran to.  It was the idea that there is a divine plan and everything and everyone is part of it.  It was the idea of nothing being outside that divinity, nothing really opposing it.  It was also the idea that every prayer, every mitzvah matters.  Those are the things I became more extreme in, as well as the ideal of kindness.  I became more radical in my Judaism in reaction to the radical changes I saw in the world.  If anything, I’ve cleaved to Judaism all the more for it, even in the face of greater pressure to do otherwise.

Perhaps…I do fit in with a people described in the Torah as “stiff-necked” and stubborn.