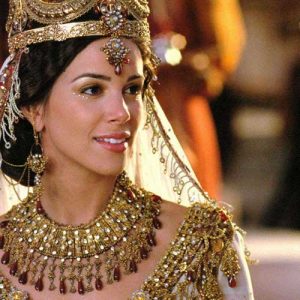 One of the benefits of going to work so early that it’s still dark is that I am able to get in a quick meal before a daytime fast begins.  I scarfed a bowl of oatmeal and thought about Ta’anit Esther.

Esther was a leader, but a leader within a pretty brutally sexist regime.  Her husband, the King, had removed his previous wife Vashti, for defying him.  There are different versions of what exactly Vashti’s failing had been, some painting her as a modest woman who refused her husband’s commands out of that modesty and others painting her less favorably.  In some Jewish circles, she’s painted as a kind of heroine of feminism and in others she’s regarded much less favorably for her defiance.  Either way, the result was the same.

Even the Queen couldn’t oppose the King and hope to be spared.

I’ve always thought of the story of Vashti as important not necessarily on its own, but more as a backdrop that helps us understand why Esther was so afraid to approach her husband to let him know of Haman’s plans to kill her people.  Otherwise, her preparations to approach the King might have seemed overly dramatic.  Ta’anit Esther (the Fast of Esther) commemorates the fast that Esther asked the Jewish people to undertake before she approached the King.  In the story, Esther makes every possible preparation she can before approaching him.  Everyone fasts, she prays, spiritually, she does everything she can to ask G-d to be on her side in the upcoming confrontation.  She adorns herself, makes delicious foods, even her approach to request an audience with the King is very carefully planned and executed.  She doesn’t rush in and interrupt him, but carefully waits to gain his attention and favor.

Esther was a woman who knew how to gain influence not through might or force or shouting over others, but quietly, gently.

She is careful with her plans, waiting for the right time.  She is patient about getting the change that is needed.  She has support from the other man in her life (sources are ambiguous over what Mordechai really was to her) and she follows his advice gracefully.  In the end, her people are saved, free to live as Jews even in a foreign Kingdom.  However, Esther herself remains in the palace, married to a King she must fear and handle carefully.

To me, Esther and Vashti look a lot like polar opposites.  Vashti may or may not have been in the right refusing the King’s request, but the way she does it is rash.  Her downfall seems to be, as much as anything, a result of her trying to push her way against the King.  Esther faces a MUCH more dramatic challenge.  Her very life and the life of her people is under threat.  This is a much bigger thing to become upset about than any request Vashti might have been reacting to.  And yet, Esther keeps a cool head and handles the situation much more gracefully, appealing to the King’s best nature and using her influence as his Queen to help him come to his own decision which ultimately saves her and her people.

As I thought about the polarity of these two women, this week came to mind.  This week, women were supposed to leave work for a day for an organized strike of sorts, to show what a “day without women” might be like.  I have some friends who participated and others who did not.  Some didn’t due to the politics of one of the organizers, which appear to be anti-Israel to an extreme.  Others didn’t because the message didn’t resonate with them.  Still others didn’t because they couldn’t get the time off work.  The organizers also wanted women to take a day off from unpaid work at home as well, meaning household chores, childcare, and pretty much all those little things a woman does in her home.

I think, to me, the approach to change I often see modern women taking, even in my own workplace and very often when I talk to women in relationships, is an approach like Vashti.  Vashti, I think, would have been very much at home in a women’s march or “Day Without Women.”  I think she would have seen the injustices that are very real and felt compelled to act and act quickly and decisively to try to do what she could to stop them.  Vashti wants to meet men where they are, on equal ground, and fight for her rights.

The problem with this approach is that it is adversarial in nature and men are primed to fight an adversary.  When we as women become Vashti, we become more than a refusal to a request or a demand for justice or rights, we become a threat that must be neutralized.  Vashti’s very public refusal became a threat to the King’s power.  If he let that threat go unchecked, then others in his court might think that they could challenge him.  It no longer mattered whether or not he cared for her.  He felt his throne was now at stake so, even if he had feelings for her, he had to put them aside.  Similarly, when we as women become adversaries to men, then they approach conflict with us just as they would another man.  Conflict quickly becomes ugly, even within marriages.  Love and tenderness are pushed aside for strength.  Everyone loses in a battle between the sexes.

Esther seems to have learned from Vashti’s example.  Esther doesn’t take up her cause in public, in a way that might make the King feel his authority is being threatened.  She plans her approach to him carefully.  She appeals to the King’s tenderness for her and helps him let down his defenses.  When the King doesn’t feel he needs to defend himself, he can be open to being generous with her.  He can hear her better.  When she makes her request, she doesn’t tell him what to do.  She doesn’t yell at him or nag him or lecture him.  She opens her heart to him and lets him see her vulnerability, her pain, her fear.  When he sees this, he’s moved to act from his own heart rather than feeling he needs to defend himself.  He wants to protect her and to help her and then she has the opening she needs to tell him that the person who has inflicted all this on her…is none other than his most trusted advisor, Haman.  Had she taken Vashti’s approach and loudly “called him out” in front of the court…the King’s reaction would likely have been very different.

Women have suffered, there is no denying that.  Women are suffering now.  Women are pressured to “have it all” and “do it all” and so many of us are wearing thin at the edges.  Unfortunately, we’re also being taught from a young age that the only way to get what little there is to go around, whether it’s love, respect, money, time, or even help from those closest to us…is to fight for it.  We’ve been taught to be Vashti at work and at home.  As a result, many of us face conflict every where and the battle just never ends and we never really feel like we’re winning.

I would rather live a life where I have influence without shouting.

I choose to live a life where I appeal to men’s better natures wherever I can and offer them the opportunity to be on the same side as me, working together against whatever the obstacle is.  Like Esther, this often means patience in waiting for change.  At home, it means letting my husband do things his way while giving to him my innermost desires and dreams and then letting go and just trusting that he will get us there, in his own time and in his own way.  At work, it means collaboration rather than confrontation.

Life is rarely, if ever a zero sum game, particularly when it comes to people with whom you have a relationship.  There is almost always a way forward where no one has to “lose.”  Esther helped the King find a way where the conflict wasn’t between him and her, but between THEM and Haman.  Vashti is on her own side, her against the world, a lonely place to be.

I’d love to see women soften, particularly when it comes to relationships.  I’d love us to be able to be more tender and vulnerable with our close friends and families, more gentle with those we love and cherish.  To me, those traits are the best and highest we can aspire to, the traits that really bring a woman’s touch into the world.

I think the problem I had with the “Day Without Women,” most of all, is that in many ways, I feel we’ve already left.  In becoming Vashti, we’ve removed Esther and the feminine from our workplaces and homes.  I’d much rather see a “Day of the Feminine,” where these traits are celebrated and brought to the forefront rather than deemed “weak” in comparison to more masculine traits.

I hope everyone has an easy fast and that we all find inspiration this Purim!