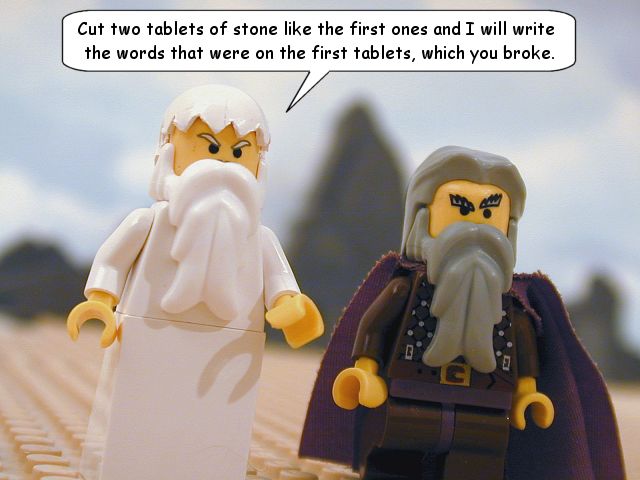 Moses threw down the first set of stone tablets, shattering them to the ground.  These were the tablets made by G-d himself, a gift to the Jewish people.  The second set?  They were made by Moses, still holy, but maybe not quite as lofty.  In some of the commentaries, we learn that the Jewish people just couldn’t handle the first set.  The first set were too holy, to separate from where they were for them to keep them.  They needed a set more grounded in the everyday, more reachable.

My mind wandered, hearing this, as I stared out the window at snow-capped mountains.  I recalled my own life and its wanderings and, in particular, our first start at conversion, years ago.

We were so idealistic and so passionate, like newlyweds to the Torah.  We took on mitzvahs quickly and pushed ourselves hard.  Before you knew it, we were part of an Orthodox community, we continued to work hard.  Finally, we had our first Beis Din meeting.  The Rabbis were kind and warm.  Nothing went “wrong.”  Our children were in day school.

And yet…despite all this, something was wrong.

We would have argued that we were ready, that things were fine, but looking back, we weren’t happy.  We were stressed and frazzled and struggling.  We were trying to reach up to grasp that first set of tablets…and it just wasn’t meant to be.  We needed to descend, to come down, and come back into the world a bit.  We weren’t ready to convert and it’s wise that we weren’t converted then.  I think we would have faced the same struggles, but with the obligations of Jews if we had.

And so, as I stood in the kitchen peeling beets for Pesach, crying tears, I began my descent.  If it had JUST been the miscommunication about Seders that left me having to prepare for an additional Seder at the last minute, that wouldn’t have been such a huge thing, but that miscommunication happened on top of a lot of other, smaller knicks and cuts that had already left me weakened.  I pulled the Seder together and we observed Passover as usual, but, somehow, my heart had deadened.  The tablets inside were shattered after almost 3 years of so much struggle and so much discouragement.

I no longer believed I was worthy of conversion.  Otherwise, wouldn’t we have made it by then?  It just seemed like the harder we worked and tried, the further it went from us.  I worried our family would never really be accepted, even after conversion, if that ever happened.  I worried I was harming my children by continuing.

And so, as that Passover faded, so did we.  My husband’s calls to meet with the Rabbi, to ask for help…went unanswered.

We both wondered if that in itself was an answer.  We stopped going to the Synagogue.  We slowly left mitzvos behind.  We got a puppy.  We went hiking and camping.  We went out into the woods and the mountains and we healed and wandered and thought a lot.  We dabbled in Reform Judaism enough to realize we didn’t fit there, either, even though we were openly accepted in ways we’d never been.

Finally, we came back.  It was almost a fluke that we did.  His mother and stepfather came to visit and, as Orthodox Jews, they needed to observe Shabbat.  We observed it with them out of a desire to spend more time with them.

Suddenly, it was almost like we’d never left.  Every feeling that had brought us to this conversion path was still there and there was an ache again, a longing.  Even the children felt it, my daughter coming up to me at shul saying, “We’re coming back next week, right?”

And so we did and we have been.

There is a difference now, though.  Just as that second set of tablets was more down to earth and easier for the Jews to connect with, so too is this second time around in conversion for us.  We feel less of that pressure, that push.  We also know more what to expect and not to let it bother us so much.  It’s a less intense, but more mature relationship.  We have been adding back mitzvos more slowly than we originally took them on.  I’m not trying to do Passover exactly perfect and instead focusing on learning at a pace that still feels good rather than a strain.

This time around may not be the heady leap the first one was, but the first one also wasn’t sustainable.  G-d knew better.  He knew my heart needed to be shattered and I needed to wander and experience different communities to know where I DIDN’T fit so that I could come back with eyes more open, more committed.  I needed a Judaism that would be more grounded and stable than that initial chaotic fire.

And so, I slowly do my Passover cleaning and hold back from stringencies that I would have held to before.  Instead, I read more about the meaning behind what I’m doing.  I savor more the experiences of what I’m doing.  I’m not rushing to an imaginary finish line.  I have my own pace and I’m not looking at anyone else.

I’m sure the first set of tablets were beautiful in their own way, but G-d knew that the Jews needed something closer to them.  They needed something that reminded them that it’s ok to be imperfect, that even the greatest mistakes can be forgiven, and that imperfection is no reason to stop trying for improvement.