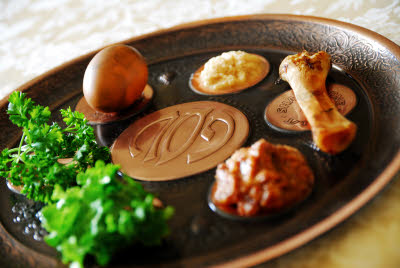 The sun becomes more and more stubborn here in Alaska and begins to pay less and less attention to the clock.  At this time of year, it begins to become a little disoriented because, besides rising much earlier and setting much later, the light also tends to look like the sunlight of mid afternoon right up until twilight begins.  As a result, it’s easy to forget when we should eat or do other things.  For Seders, this means we can’t begin a Seder until at least 10:20, but we also need to eat our matzah before midnight.  Some people work around this by flipping the order of their Seder and eating the meal that is usually after the Seder first, then doing the Seder part.  This year, we’re going to have a snack for dinner, then do the whole Seder beginning at the appropriate time and we’re lucky enough to have invitations to another family’s Seder to do this.

I’ve never been to a Seder I didn’t cook and help put on.  We’ve had guests and managed to put on Seders every year, but I’ve never experienced someone else’s Seder and I’m really excited to do so.  The kids went once to a community Seder, but were a little disappointed.  It was a kiruv Seder and they felt that they missed out going there instead of staying home.  I’m sure it was a good Seder, though, just not what they were used to.  We do the best we can with my husband leading with his memories of all the Seders he’s been to, but with his lack of singing ability, we’re kind of left on our own for the tunes to songs and filling in some of the blanks.

The story of Exodus is different for us, I think.  My family very much feels like we’re somewhere between bondage and freedom, but not quite there yet.  “Next year in Jerusalem!” doesn’t form on our lips in the same way, since if next year really is in Jerusalem with Moshiach having arrived, our family might be left behind.  There is a joy in feeling like maybe, just maybe, this Nissan (first month of the Jewish calendar) might just be the beginning of when our own wandering will end in the mikvah, but it’s mixed with the feeling that we’re still strangers at this Seder.  I wonder at the mixed multitude that left Egypt with the Jews.  Did they look back at what they were leaving behind?  What was it like as they worked to integrate themselves with the Hebrews?  What tribes absorbed them or were they kind of camped on the outskirts, part of the community, but not really completely connected?  They often only seem mentioned when they make a mistake, kind of like how a person’s conversion status only seems to come up when they’re gone off the derech (lapsed in observance) or make a headline for something done wrong.

I go back and forth between feeling a connection in the story to the fleeing Hebrews, my spiritual ancestors, and the mixed multitude that made the brave decision to throw their lot in with the fleeing Jews.  I wonder at what caused them to make their decision.  Was it that they saw the plagues and miracles and realized that the Hebrews were G-d’s chosen people and wanted to join them or was it that life in Egypt had become so difficult for them that they decided to take their chances on change?  Did they leave behind family members who would have been confused at this choice?  Did they already have connections with the Hebrews, like Moses’s adoptive mother, or were they complete strangers, now trying to fit in and make friends?  Did they leave a comfortable life behind in Egypt for the uncertainty of this new one or were they themselves also slaves?  Did they cleave to the others who came along or did they work to integrate into the Jewish people?  Did their children have problems marrying or were they welcomed?

Sadly, we don’t know much of their story and what is told in Midrash, isn’t always pleasant.  They were blamed quite a bit for the sin of the golden calf and are often mentioned whenever idolatry becomes a problem for the Jews.  Was it hard for them to leave their old ways behind and so tempting to go back to those whenever they were afraid or had a crisis of faith?

If it’s true that every successful convert was present at Mount Sinai when the Torah was given, was I a Hebrew then or one of the mixed multitude?

I like to think that most of the mixed multitude were grateful for their place in the camp of the Jews and did their best to integrate into one of the tribes.  I’m sure it probably wasn’t always easy and they had their challenges, but I like to think that the reason we don’t know much about them from the golden calf on is because they became virtually indistinguishable from their Jewish-born brethren, living lives that really weren’t different enough from other Jews to be noteworthy.

For me, I’m grateful for a place at the Seder table.  I’m grateful to celebrate freedom with G-d’s chosen people even as I work toward that chosenness myself.  I look forward to the day when “Next year in Jerusalem!” will slip joyfully and easily off my tongue.  Until then, I work to be worthy of that freedom and that place among the camp.

May you all have a kosher and happy Passover!