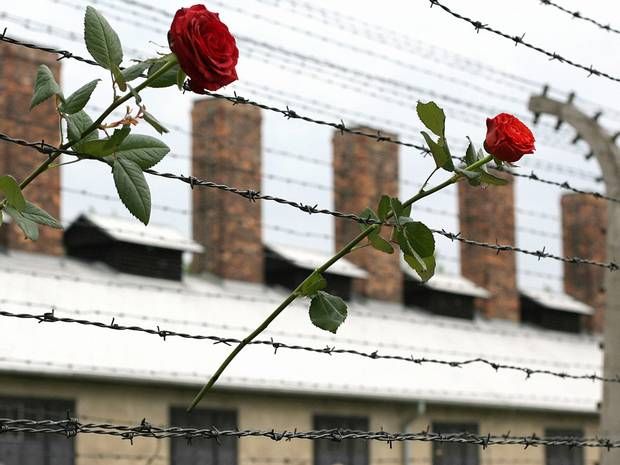 It’s a line from one of my favorite movies, which came out several years ago, but I found it poignant for reasons that had little to do with its use in the film.  Rain has always been a comfort to me, the child of a farmer who would worry over his crops if it didn’t rain regularly.  The sound of rain was a sound of calm, a sign that everything would be all right.

It feels so fitting that today is the first day we’ve had rain here in Alaska, rather than some mix of snow and freezing rain, and that it comes on the day we remember the Holocaust.  It is as if G-d himself weeps.

Many years ago, it was also a rainy day when I confronted the horrors of the holocaust.  I couldn’t quite explain to people why I felt it necessary to travel from France, where I was staying as an exchange student, to Poland.  Most of my other classmates were headed to sunny Greece.  I’d only ever met one Jewish person in my life, my bacon-loving friend Phill, who couldn’t explain Chanukah to me.  Still, it seemed like something I should make the effort to do if I was within a couple of train rides of the place.  I felt like all people need to remember what happened there and really feel the weight of it, Jewish or not.

So, with a couple of friends, we traveled first to Berlin and then, after some sightseeing there, boarded a rickety, old overnight train to Krakow.  The train really looked like it might have been from World War 2, with rough green wool blankets on the sleeper coach bunks and heavy leather harnesses to keep you from rolling out of bed.  In the night, we crossed the border between Germany and Poland and were awakened by shouts in Polish, which I can’t even remotely understand.  There were men in military uniforms with automatic rifles, yelling and shining flashlights in our faces.  All we could do was hold out our passports and hope they’d be returned.  We were relieved but uneasy when they were stamped and thrown back at us.

It was cold and rainy the entire time we were in Poland, the kind of damp cold that gets into your bones and doesn’t leave no matter how much coffee you drink or how strong it is.  We went to Auschwitz the next day in a slow drizzle of rain, never a downpour, but just enough to soak us.  We walked and each step felt like our feet were heavier.  We toured the grounds, read the facts, but the thing that tore at my heart the most was the roses.  People had wound red roses into the barbed wire of the fence around the camp.  I never saw anyone put the roses there.  I didn’t know if it was someone who had lost a family member or loved one there that had left them or just someone moved by the tragedy of the place.  Either way, the only picture I took that day was of a rose, threaded through the barbed wire, the day gray and rainy and the red of the rose the only real color.

For me, Poland was land of muted shades, dark, dreary, the color of life drained from it.

After that day, my friends and I sat together, numb.  The human mind and heart can only process so much sadness, so much horror and then it’s like everything shuts down.  There was a hot meal in front of us and I’m sure the food was delicious, but we couldn’t taste it.  We just lifted our forks and spoons and ate a few bites without looking at it.  Our eyes stared straight ahead like zombies.

As hard as it was, I’m still very glad I went and I’d be glad even if I had never learned anything more about Judaism.  I think it’s important for all people to honor the memory of those who perished.

Now, the Holocaust is much nearer to me than it was then.  I’ve met survivors and most of the Jews I know have lost family.  When I watch a documentary, the faces could be friends or family or even me and my children, unlike when I saw those same documentaries growing up, when the Holocaust was something that happened to other people, no one I knew.  The world has also changed since I made that trip to Poland.  When I traveled from Berlin, the fall of communism was a more recent phenomenon and the future seemed so optimistic.  It was the mid-90’s and anti-semitism was at a lull and everyone was certain that the millennium to come would only bring more peace, more prosperity, and even greater enlightenment.  There was talk everywhere of the coming European Union, something unthinkable in my grandparent’s generation where Europe was torn apart by wars.

Going to Auschwitz then was very much a history lesson, a visit to horrors locked in the past.  Now?  It feels like those old ghosts are stirring again and that the world has forgotten the inevitable conclusion to hate.

It still rains, though and I still do believe that G-d is in the rain, weeping with us, remembering with us, and also hoping with us.  As long as there are roses in the barbed wire, then perhaps we can stop these patterns before they repeat.