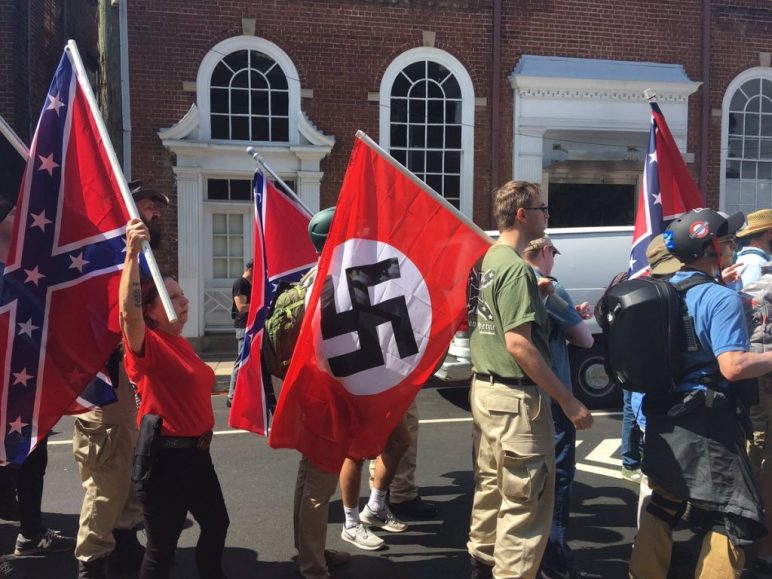 The Sabbath still ends pretty late up here.  Havdalah was at 11:35 last night and we weren’t done until later.  There were a lot of visitors this weekend and things ran a little late.  By chance, we opted to drive home after havdalah, to sleep in our own beds instead of the RV.  I came home, bleary-eyed and tired and I logged on to my computer to stay awake until Mr. Safek arrived with the RV, to help him unload it.

I blinked, not quite believing what I was seeing, reports of Nazis marching, with lit torches on a college campus in Virginia.  Reports of clashes with counter-protestors that turned bloody, and reports of death at the hands of a terrorist who drove through a crowd of people.

It’s important to note the context in which this news came to me.

Our Chabad House hosts many visitors in summer and this weekend we had not only several families from NY and New Jersey, but also a large, rambunctious camp group of college boys.  This group spent more time at the Synagogue than most camp groups that come through, so we spent more time with these boys than many of the other groups.  For many of them, this trip was their first deep interaction with Judaism, particularly Orthodox Judaism.  Many were wearing kippahs and tzitzits for the first time, proud to show them.  They sang and danced and were loud and lively, with a youthful enthusiasm and idealism.  They had been camping all over Alaska and told us stories of using an icy cold glacial river as a mikvah, of climbing mountains while singing Jewish songs.  They stayed clear across town in a hostel in a kind of run down part of town, walking the whole way for services, tzitzits out and kippahs showing the whole way, unafraid.

We laughed and explained that they were a little late.  Our Mayor is Jewish and Jews have been a part of Alaskan history since it was recorded, coming here first with the fur trade before gold or oil was ever discovered.  These boys, rough around the edges as they might be, represented hope, idealism, and pride and their presence challenged us to keep up.  They came from college campuses not unlike the one in Virginia.  As we waited for Havdalah, I sat and listened to them talk with our Rabbi about the possibility of starting Jewish clubs at their campuses or what the clubs were already doing, their fears about being “too pushy” or “too religious,” but also their obvious desire to bring back a little of what they’d experienced here in the mountains with all this inspiration.

As I drove back home last night on the highway, in the opposite lanes, I saw a police car stopped with flashing lights, I looked over and saw a moose that had been killed on the road, fresh blood spread across the roadway, it’s body torn as I looked away I felt a growing unease after the easy lightheartedness of the weekend, but I tried to brush it away.  Moose are killed on the roads up here, but something about this moose and the timing had me feeling on edge.

It wasn’t long after that I opened up my computer and read about the protests in Charlottesville.

I saw pictures of men who looked like me or my family and who were younger than I am, carrying torches and yelling hatred about my family.  I saw pictures of violent conflict on our own soil and even pictures of the car plowing through a crowd of people as if they were moose, bodies flying.  It was surreal.  I saw the columned buildings of the college campus in the torchlight and I immediately thought of those boys I’d spent the weekend with, headed back to college campuses this fall.  My mind reeled and I began to think about how I would explain this to my own children.

We are often sheltered from events in the lower 48 here in Alaska, separated by timezones and distance.  I am not naive enough, though, to think that the same hate does not also exist here, in the small communities in the same woods those boys were singing through.  I remembered feeling nervous when I saw that they were walking through the less desirable parts of town visibly Jewish and some unease when I realized they would have also been doing this in some of the more remote areas, places where people who seek to avoid the mainstream go and where the beliefs and ideas that made them feel the need to separate from the rest of the world are allowed to fester.  There are compounds built in the woods up here where all different kinds of armed people who believe this world is headed in the wrong direction wait.

This is all just 2 weeks or so after our own Rabbi counseled us to have our son wear a baseball cap when he can, to cover his kippah, and for him to tuck in his tzitzits, telling us that another boy in the Synagogue had been the target of racist graffiti on his school notebooks, swastikas scrawled across his notebooks as a threat…in elementary school.

Most converts are asked by the Beit Din (Rabbinical Court) that converts them why they would want to join the Jewish people and subject themselves to anti-semitism.  My answer will be an easy one.  We already are effected by it.  Already, those who would hate Jews hate us.  They make no distinctions for my husband’s murky halakhic status or my own lack of any Jewish status.  To them, we are Jews and to them, I am even worse than a born Jew because I once was like them, fully white, and chose to cleave to a people I was not born to.  If we chose not to convert, it wouldn’t stop people from hating us, but it would cut us off from support and inclusion in a community that understands what it is to be the target of such malice.

The contrast between the day of Shabbos and the night after was a stark reminder of the world we live in now, where hate has become more openly expressed again.  I don’t doubt that it’s always been there, but now we see them march with no masks over their faces.  However, we also see hope in young men who also no longer want to hide their Jewishness.

I can’t help but wonder where this conflict will all end and worry over my children.  There is no mountain far enough to shelter us from such a storm.

2 thoughts on “The View Of Virginia From Alaska”