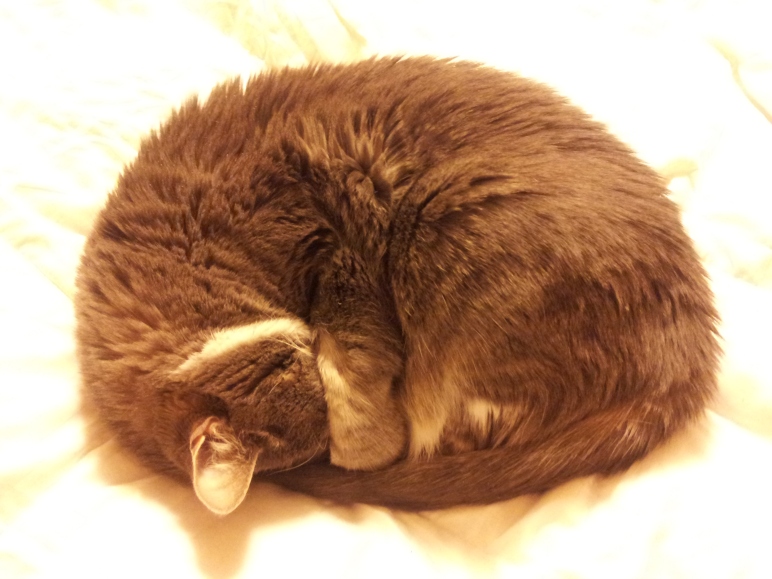 When I was just out of college and in one of my first apartments, I yearned for pets.  I’d grown up with cats and dogs and my time as a college student had left me missing furry companionship.  By chance, my apartment lease allowed me 2 cats.  First came Grendel, a temperamental female cat that was an orange tabby.  I’m told it’s very rare for an orange tabby to be female, but apparently no one had told Grendel.  She came from my parents’ farm in a cardboard box.  About a year later, Iggy came along, a tiny gray tabby cat that my brother had said was weaned.  After unsuccessfully trying to get him to eat cat food, I gave up and bought kitten milk and hand fed him until he was able to eat on his own.  He slept on my chest to keep him warm, in the same spot that would later be claimed by each of my babies.

Iggy passed away last week at the ripe old age of 16 years old.

Iggy was the kind of cat that was perfect to raise children with.  He was patient with almost every kind of affection they offered and he enjoyed sleeping next to my daughter.  He was a faithful companion to all of us, making the trip first from Illinois to Florida and then, 5 years ago, from Florida to Alaska.  Whenever someone in the family was sick, Iggy felt it was his duty to sleep on them and purr and I think that the feeling of a sleeping cat purring on you is about the most comforting feeling there is.

Iggy’s passing was hard on all of us, even if we knew it was coming.

It began with him hemorrhaging blood out his backside and he became weaker and weaker.  Toward the end, when I woke in the morning and rejoined his side, he was pretty much gone, his pupils fixed and dilated and his body just gasping for air every so often.  It was painful to witness and our family took turns petting him to the very end.

My daughter was hit especially hard by his passing since it’s the first pet she’s ever been close to that died.  As we sat with Iggy, offering what comfort we could to him, we talked about how everything comes from Hashem and everything eventually returns to Hashem.  Iggy was being freed from this life to return to his source.  She asked the tough questions that have no easy answers, like why death has to be a part of life.  I did my best to answer and also to admit that I don’t always know myself.

Then, Iggy took his last breath and was still.

We wrapped him in one of my daughter’s baby blankets she’d kept for her stuffed animals and the children stayed home as my husband drove us to the vet.  I sobbed openly as I held his body, remembering how much heavier a body is when the life has left it.  I thanked Iggy for being with me through everything, from being a newlywed, then mother, then divorced single mother, then remarried.  Through hard times and good times, Iggy had just always been there…until now.

I guess Iggy just couldn’t face another cross-country move at his age.

Iggy was a cat that taught us all about love and death and life.  He was a creature of Hashem’s and to Hashem he has finally returned.

4 thoughts on “The Days of Iggy the Cat”