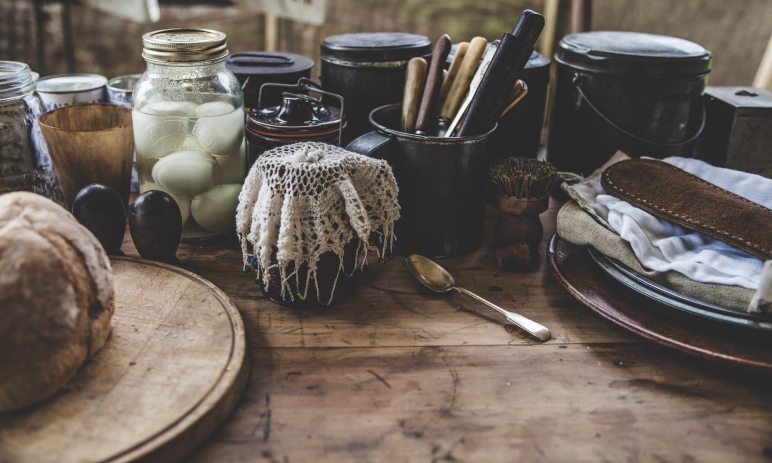 Once you’ve converted…you spend quite a bit of time at the mikvah, it seems or at least preoccupied with toiveling.  Toiveling is the act of removing ritual impurity from a person or object and it requires a kosher mikvah.  Conversion requires toiveling a person as do the laws of family purity, but anything that a Jew will use in conjunction with food or drink that was purchased from a non-Jew must also be toiveled.  This is a different and separate process from kashering, which is the process by which a vessel or utensil that is not kosher is made kosher.  This week, we’re busy doing both and the kids found this rather confusing.

Kashering is something that Jews do often since it can fix any mistakes you may have made keeping kosher.  Inevitably, a child or preoccupied adult will use a “meat” spoon with a “dairy” meal, rendering that spoon then treif, or un-kosher.  The spoon then can’t be used again until it is kashered.  Even when you do your best to set up your kitchen and train your family to avoid these mistakes, they still sometimes happen.  A friend of mine kept a “drawer of questionable kashrus” for items like this and then kashered them before Passover each year.  Passover is a time when everyone is kashering since you can’t use your regular pots pans or even your stove or oven without kashering them just for passover.  While a lot of people keep separate sets of things just for Passover, inevitably there are things that need to be kashered for the holiday.

Our Rabbi also ruled that we need to kasher all of our kitchen things since even though they were only used with kosher ingredients, a non-Jew cooked on them.  What can’t be kashered had to be thrown out and if it can’t be kashered, then there’s no point toiveling it.  The only exception to this is things that never had anything hot or sharp used on them, which we can simply toivel and keep.  In most cases, kashering is done with either boiling water or, less often, a hot flame like a blowtorch.

Just what you feel like doing in July without central air conditioning.

Toiveling, on the other hand, is something less often done.  You only need to toivel something when you have purchased it from a non-Jew.  If it’s new and hasn’t been used before, there’s no need to kasher it, just toivel it.  You can toivel utensils and pots, pans, bowls, and dishes in a mikvah and some communities have special mikvahs just for this purpose.  Here we’re also lucky to have a lake full of natural water that can also be used to toivel.

It amounts to a whole lot of buying of new things, trips to the mikvah or lake, and dipping things in boiling water.  If you’re looking for a great gift to buy a recent convert, gift certificates to stores that sell kitchen things is a great idea…or mezuzah scrolls.  Both are things that new converts are scrambling to acquire soon after their mikvah.

I’m hoping to be back to cooking again sometime soon, but for now, cold wraps on paper plates are keeping us fed while I wait to finish preparing my kitchen.  I’m focusing on the fact that after this, I will only have to toivel and kasher as often as my Jewish friends rather than this kind of mass-marathon.